Comedian/Personality Kathy Griffin is known for her self deprecating jibes about her being a perennial “B Lister” in Hollywood and today those statements may seem optimistic. Kathy found herself at the center of a firestorm after she posted images that appeared to show her holding President Trump’s severed, bloody head. 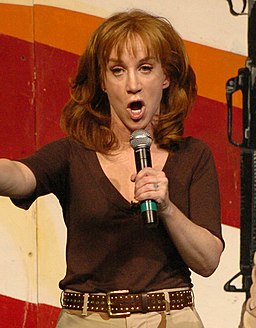 Social media erupted into angry complaints and even threats as the image went somewhat viral. Both the right and left found something to agree on for the first time in a while, that being that the picture went too far in trying to express the feelings on the left and especially in the media toward President Trump. While it is true that people have burned other Presidents in effigy and even lynched the effigies (Clinton, Bush, Obama) in those cases it was being done by people in foreign countries or everyday people in the US. No media personalities went that far until now.

By the end of the day today Kathy Griffin had been dropped by CNN from her spot with Anderson Cooper doing the New Years show and also cancelled by venues at some upcoming appearances. Is this an overreaction or is it deserved? Many people alive today remember a time, when America was strong, that people respected the office of the President and even if they didn’t agree with the policies of the person holding the office they did respect the office and this respect was a part of the fabric of our country.

Over the years this respect has been eroded. Maybe Richard Nixon was the first to do significant damage to the office with the Watergate scandal and his resignation. Then things were relatively quiet except for some peanut jokes and Billy carter during the Jimmy Carter years and clumsy jokes when Ford was President.

The real damage started in my opinion with the Clinton Presidency when the right attacked him and his wife mercilessly and did everything they could to ruin the reputation of the person holding the office. From there each President has been scrutinized and criticized at a new level but the way the left and the media is treating Trump and his administration is at least as bad as the Clinton years and to me looks very bad on the people doing it. I think it will further erode the respect for the office of president of the United States or more accurately, already has.